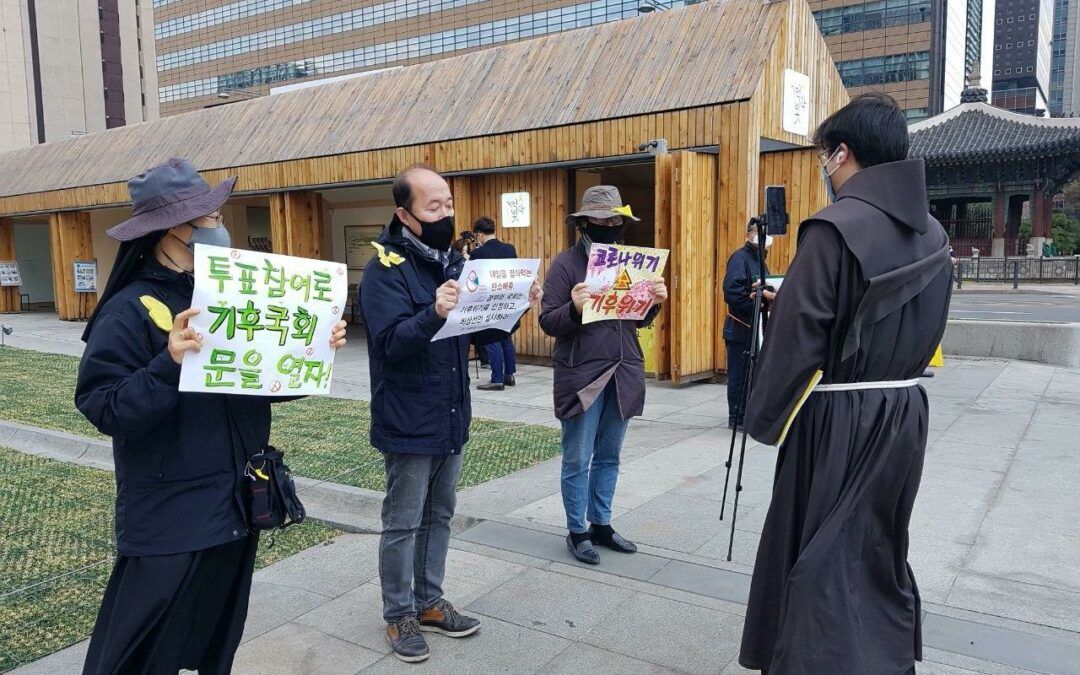 The Korean branch of the Global Catholic Climate Movement (GCCM Korea) comprises more than 30 local Catholic organizations, including the JPIC Commission of the Korean OFM Province, as well as hundreds of individual Catholics. It is taking action within and outside the Church to help keep the average global temperature from rising by a further 0.5℃. GCCM Korea currently has a steering committee that plans its overall strategy and three subcommittees (a training team, media team, and action team).

On Good Friday this year, they held a Friday climate strike in the central square of Seoul. Since no large public gatherings were allowed in the city due to the epidemic, only five members could participate in the demonstration and the associated Way of Cross, which was streamed live on Facebook. Since the theme of the event was “Respect for Life”, the participants prayed for Creation and remembered the victims of COVID-19, their families, and medical staff.

The messages on their signs emphasized how system change is crucial if the climate crisis is to be resolved;

The Friday Climate Action will be held every Friday and the action team is planning a variety of different activities such as bicycle marches, green parties at vegan restaurants, peaceful demonstrations in front of a coal-fired power plant, etc. Even if the restrictions due to the epidemic mean that there will be far fewer participants, every Friday there will still be individual protests in different localities and various campaigns on social media.

A few years ago, a Swedish teenager, Greta Thunberg, started a climate protest every Friday, and it became a global youth climate campaign. Now GCCM Korea is beginning Friday Climate Action in Korea. We urge more Franciscans to join this movement and take action every Friday, not only in Korea or Asia and but also around the world. Now is the time to make changes in support of our climate — we need system change, not climate change!