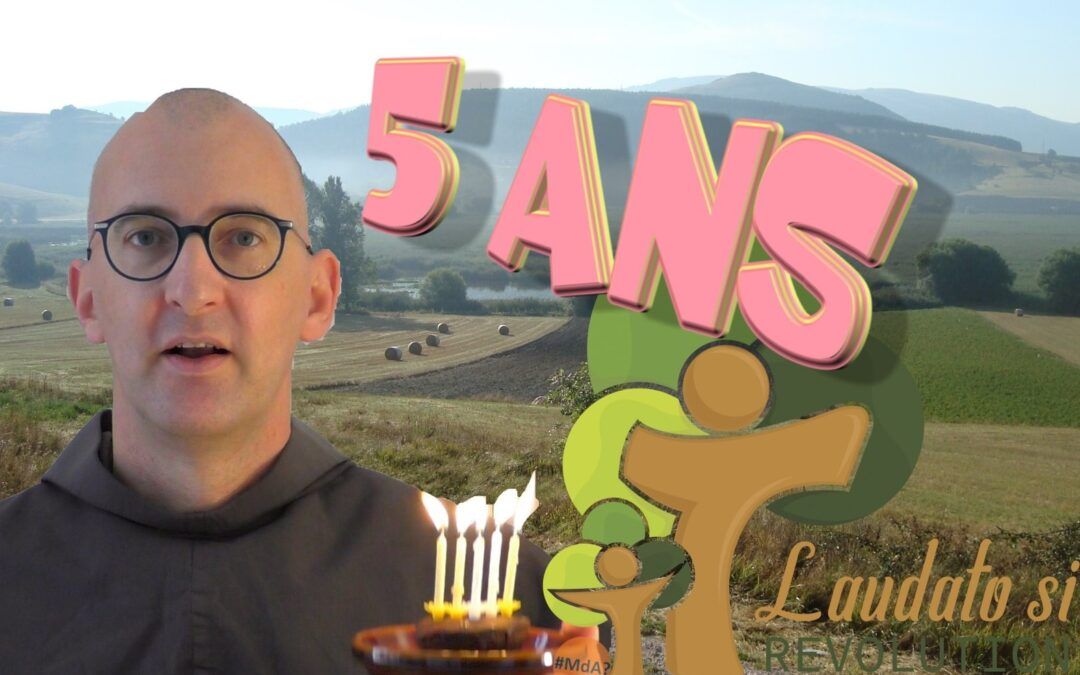 What Is It About?

Five years ago, Pope Francis published one of the major texts of his pontificate, the encyclical Laudato Si’. In a March video, the pope encouraged parishes and religious communities to participate in “Laudato Si’ Week” from May 16th-24th, a week to reflect on and reexamine our commitment to safeguarding our common home. For this occasion, Fr. Frédéric-Marie Le Méhauté, a theologian and director of Youth Ministry and Vocations in the Province of Blessed John Duns Scotus (France and Belgium) decided to launch a web series entitled, “Le Monde d’Après” (“The World After”).

Fr. Frédéric-Marie, why create a mini-series around Laudato Si’?

In my work and research as a theologian, I was preparing a course on the Theology of Creation with certain lectures dedicated to Laudato Si’, which were cancelled because of the COVID-19 crisis. After getting over the initial disappointment, I remained in contact with the young people that I serve. In the course of our conversations, I realized that they did not know about the encyclical. As the last Plenary Council of the Order in Nairobi said, “In some areas the Church is resisting being challenged or entering into dialogue with the Pope’s call, showing little or no interest in Evangelii Gaudium, Laudato Si’, and Amoris Laetitia” (§6). So when I reread Laudato Si’ in the midst of confinement, the pope’s text had a different meaning for me—a prophetic one! Up until then, I had had some good conferences about the encyclical, but in what way had it profoundly changed my life? I told myself that I had to create a tool to make the text more accessible to people, in particular those between the ages of 18 and 25.

What is the format of this mini-series that you are talking about?

“Le Monde d’Après” is a series of short, thoughtful videos made for the web and published on the YouTube channel of our Province . Each video is between 8-9 minutes and serves to develop a theme of the encyclical through a combination of quotes, reflection, and a touch of humor. I admit that I am doing this just as much to stretch myself and change my own ideas on things. Above all, it is my hope that these videos can help us develop what the pope calls “ecological virtues” and better perceive that our faith in the Triune God nourishes and is nourished by just such a conversion.

Who is the intended audience?

Within the prayer groups and weekend events that are a part of the Youth Ministry and Vocations work of the Province, we have realized that ecology is a major concern for the next generation. I’ve heard many remarks of this kind: “You talk to us about St. Francis, and that’s great. But what about his connection to ecology?” Young people feel that these issues concern their very future, and it’s their hope that we will nurture them. And if this mini-series can speak to people 18-35, then it can speak to anybody!

Where did this project start and why this type of format and distribution?

For many years I have been asking myself about our Franciscan presence on the “digital continent.” However, this particular project came to fruition at the start of confinement, amidst my shock, anger, and deepening of my prayer-life. Confinement was the opportunity to familiarize myself with a video tool that I had already tried to learn, but required too much time to master… suddenly, my schedule was free—the opportunity I had dreamt of! Many parishes or religious communities have likewise benefited from this situation by investing in social networks for prayers, for Masses, and in impressive numbers! But I had a desire to cross the line between faith and practice. For me, this line is particularly tenuous among many Catholics and, in particular, on social networks. These days we have seen beautiful prayers, beautiful images, beautiful pious thoughts. A “Like” here, sometimes a “Share” there… and we have the impression that we are putting our faith into practice! But the world is not going to change with a click on Facebook, not even with a signature on a petition. How can we help return to the concrete, to the real, and get out of virtual relationships? The paradox of the project is that I am using a screen to inspire people to go beyond their screens!

Fr. Frédéric-Marie, how do you make the episodes?

I did not start with a fixed plan. I began with a reflection on the “Canticle of the Creatures,” the title of the encyclical, because there is something specifically Franciscan there that I wanted to share. It’s a Franciscan reading of the text that I propose as well, not simply an analysis of it. Alongside this reflection, I experimented on my own with the computer’s capabilities which gave me other ideas about how to animate the videos. One ultimately called for another. Fr. Alejandro, one of the student friars of the community, has also helped me with the filming, the editing, and ideas… Reflecting on things together is more fruitful and more fun.

“Laudato Si’ Week” is now taking place during the COVID-19 pandemic, how does this inspire you?

In light of the current crisis, we undoubtedly recognize that Laudato Si’ ranks among the greatest documents of the “social Magisterium” of the Church. This encyclical tells us that science alone will not save the world, that we need a courageous spiritual and cultural revolution. It offers hope, above all, and opens up a path. Without a radical conversion of our ways of consuming and living, we will continue to be predators of nature and enemies of one another. What this pandemic adds from this point forward is a clear awareness of the urgency of the situation. No longer is it possible to put one’s head in the sand or to preface a discussion of the matter with “Are we really sure…?” No change will be easy, and no one knows today to which side the balance will fall. What is certain is that nothing will change without us. Each person finds themselves with a choice—it is this choice and this engagement that the pope brings to light. The mini-series is my modest contribution to this work of discernment.