Public action against a climate villain corporation in Korea

“Shareholders of corporates are not the owners of the Earth!”

Members of Korean Climate Emergency Action (KCEA) and Global Catholic Climate Movement Korea (GCCM Korea) took public action against the biggest steelmaker in Korea, POSCO Co., Ltd. on March 27. KCEA is a coalition of 377 organizations, which cover scientific, educational, political, human rights, feminist, juvenile, environmental, energy transition and civil society, and agricultural cooperatives. And GCCM Korea comprises more than 30 Catholic organizations in Korea. The JPIC Office of the Holy Korean Martyrs Province (Korea) takes part in both alliances. More than 30 members of these coalitions, including Franciscans, gathered in front of the main building of POSCO in Seoul, where its shareholders were having the general assembly. After the press conference on the street, they took a series of actions that demonstrated the catastrophic impacts of the fossil fuel industry on the entire ecosystem and humanity.

“Shareholders of POSCO are not the owners of the Earth!” they shouted. The demonstrators strongly demanded the company take responsibility for the climate crisis and take immediate action on it. The corporate’s responsibility for the climate crisis is enormous. Greenhouse gas (GHG) emissions from the top 20 companies in Korea account for 58% of Korea’s total emissions. And POSCO is the one that stands out among them. It’s been the No.1 domestic GHG emitter for the past eight years. The amount of its emission in 2018 was 73 million tons, which is one-tenth of the total domestic emission. Besides, POSCO ENERGY, a subsidiary of the corporate, is also the eighth in Korea by emitting 11.7 million tons.

It’s a corporation primarily based on various fossil fuel industries along with the steel industry, which is already a heavy emissions industry. POSCO ENERGY is the largest privately-owned power generation company in Korea and operates an LNG power plant. And POSCO International is dedicated to the development of natural gas. Also, POSCO ENERGY operates coal power plants in Vietnam, and another subsidiary, POSPOWER, is constructing Korea’s largest coal-fired power plant in a rural area. When completed, it will emit an enormous amount of GHG and ultrafine dust of 13 million tons per year.

As such, the fast growth and profits of the company were achieved at the expense of the climate system. When large corporates such as POSCO are left free to thrive on pursuing profits without any regulations, the climate crisis will get inevitably worsened. Moreover, POSCO is notorious for its repression over its laborers’ union with secret and illegal strategies to dismantle the union and imprison its members. However, workers’ rights, human rights, public health, and the global environment can never be sacrificed for the profits of a private corporation.

On the other hand, many countries are seeking a transition to the alternative socio-economic system to deal with the climate crisis. A road map is being implemented to end the coal-fired power plant industry, and they are looking for ways to curve carbon emissions dramatically. Major polluters in Korea must follow these examples, making righteous transitions from now on. 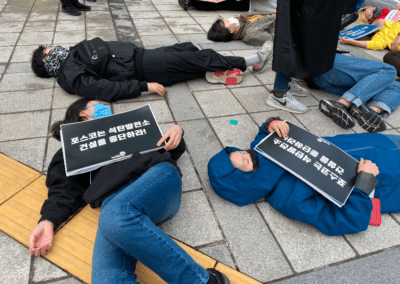 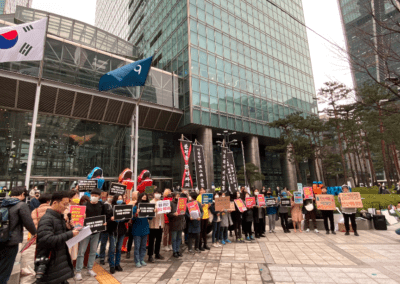