‘Everything is connected’ A great weekend in Rome! 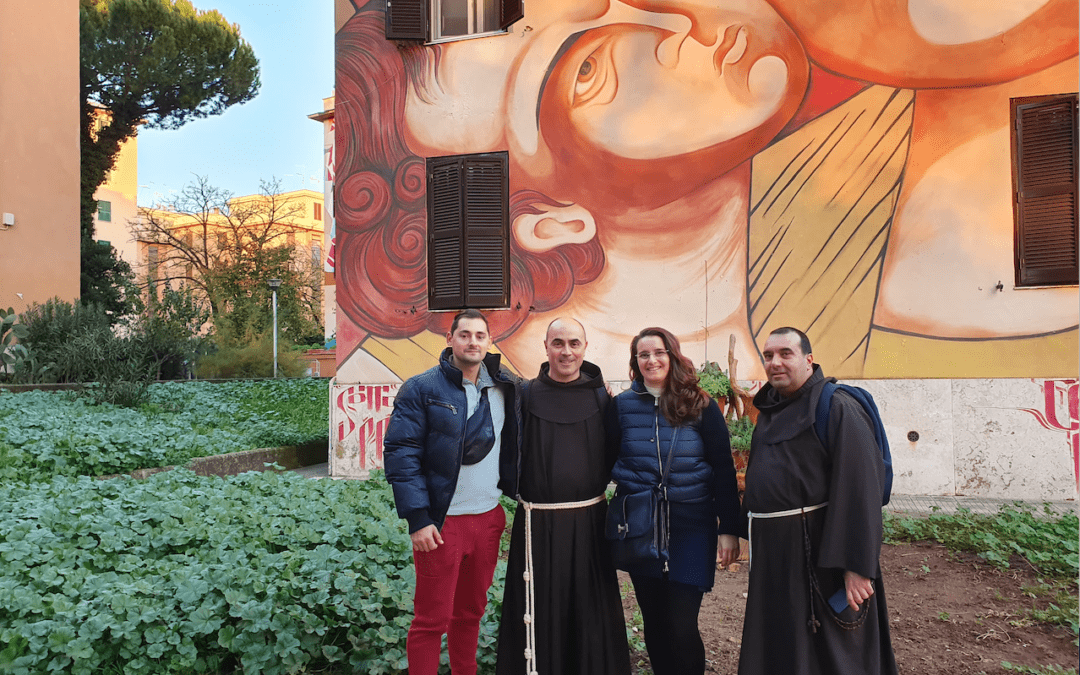 The weekend in Rome organised by the Conference of Friars Minor of Italy (COMPI) in the The Pontifical University ‘Antonianum’ was based on Pope Francis’ encyclical ‘Laudato Sí’, giving life to St Francis’ views of beauty, fraternity with all of creation and Earth being our mother and sister. The weekend was full of input sessions and discussions on integral ecology where St Francis views were seen as solutions to today’s challenges of environmental degradation, decrease in the quality of life, increase in poverty, increase in the refugee population and immigration through creating healthy human societies that promote beauty, cultural diversity, dignity and justice for all across generations.

The weekend was for youths who, in their own way, all are potential seeds that can make a difference Iland bring about positive change in their workplace, their home and their locality. The format of the weekend was partly theoretical and partly experiencial in the form of visits to organisations that are helping the poor and support the environment. The weekend workshop challenged the participants’ values and persective for a shift in paradigm, a deep change in the way we live through an increase in awareness of the interconnectedness of all.

One of the perspectives that was challenged was the anthropological. The way modern man has lived has given rise to an increase in individualism, self sufficiency, gender issues and disconnectedness from nature. The way education and modern culture has been developing created a gap between humanity and nature. By living the perspective that man is at the centre of creation, man’s relationship with nature has been distorted and has put him in a position to control creation, which resulted in man misusing and destroying natural resources, and simplifying the relation with nature to that of consumerism and market goods.

Another challenge posed was a theological one. Apart from the destruction of the relation of man with nature, western modern man has also a distorted way of perceiving God. Our present ecological crisis will get worse if we do not reject the axiom that nature has no reason for existence other than that to serve man. Therefore the perspective challenge consists of understanding that if we are to love one another, we are also to love and take care of what God created, since taking care of nature – our common home – is taking care of others. A question was also posed as to why protect indinenous people and the Amazon in particular. Given that the Amazon supports global common life including the quality of air we all breath and the amount of fresh water on our planet, then it is up to all of us to protect and support this region.

The indigenous people’s culture respects the Amazon and nature in general, and given that modern man has a capitalist mindset where nature is an object of manipulation and is used to accumulate material wealth, mediation between the two cultures becomes important for understanding the need of returning to the right mindset and have humanity as part of and not the centre of creation. This is the change in paradigm that modern man has to go through to be able to solve global issues. Unlike globalised, international companies that promote the ‘colonialist way of creating economies’ (‘thinking globally and acting locally’), integral ecology challenges us to start ‘thinking locally and acting globally’. In this new paradigm, local communities such as indigenous tribes in the Amazon whose lifestyle embraces the care of nature, can be respected and we can also learn from them to apply their knowledge and wisdom in order to address and act upon global issues.

Just like God created and is the father of everything, thus making us humans brothers and sisters with every other human and creature on earth, ‘Madre terra’ is the mother figure, just like Mary the mother of Jesus. She is a mother of all, and a representation of the importance of the feminine for nurturing and upholding humanity, an idea that has been in the past shunned out in the post modern and modern society.

The experiential part of the weekend seminar included visits to social organisations such as ‘Emmaus’,  where environmental and social needs are met by recycling unwanted material such as paintings, furniture and jewellery for reuse. A visit to ‘Comunità Sant’Egidio’ highlighted the fundamental importance of cultivating genuine friendship relationships with the excluded.

Through discussions and experiential learning in various social organisations, integral ecology was presented not as one option but the only option and path humanity must thread upon in order to have healthy political and economic systems supported by the right spiritual insight that integrated all cultures and created a balance between man, culture and the environment. The weekend workshop was an enriching experience on all levels, also making one realise that the beauty, joy and happiness that was shared in the group and the places visited are also a requirement for humanity to realise that the sacredness of life is in time, in the moment.  A big thanks to the franciscan friars of Italy for inviting us over to this great initiative, for which we were also accompanied by Fr Loreto Zerafa OFM and Fr Mark Ciantar OFM.

Photo: ‘Croce e via al tramonto’, by Giuseppe Siniscalchi (2014), exposed in the Pinacoteca Museo Sant’Egidio, Convento di San Pasquale of the Friars Minor of Taranto. The ‘fronteversismo’ is an artistic, philosophical and cultural movement initiated by this lawyer and painter from the puglia region; it underlines the necessity to go beyond appearances and delve deeper in every field, in order to regain an integration with oneself, others and creation.