Emergency Ukraine: Help to Ukraine through our Friars

The voices of our brothers living on the war front reach us with all the dismay with which they are inevitably charged.

Friar Daniel Botvina, Provincial Minister of Ukraine, described to Friar Massimo Fusarelli, OFM General Minister, the situation of serious difficulty experienced by the friars who live in the city of Konotop, occupied by the Russians last Thursday, February 24. “The friars are well and have remained there with the people, not to abandon them”.

The words of Fr Romualdo, parish priest of the Konotop friary, describe in detail a scenario that no one thought possible until a few days ago. The streets have become a theatre of war, armoured vehicles have been knocked down, cars have been set on fire and, above all, military and civilian victims are scattered throughout the city. The picture is compounded by the despair into which the population has fallen on hearing the news that the city has been lost to the Ukrainian army.

The parish immediately opened its doors to everyone. The friars offered answers to basic needs such as a place to spend the night or to get a meal, but also to the need for a word of comfort. They are mostly elderly people, women and children who have found themselves helpless in the face of the outbreak of war on their doorstep. In spite of these efforts, it is becoming increasingly difficult to provide food, medicine and other essentials for those who have all left their homes. The number of people being cared for is increasing and the friars need help. 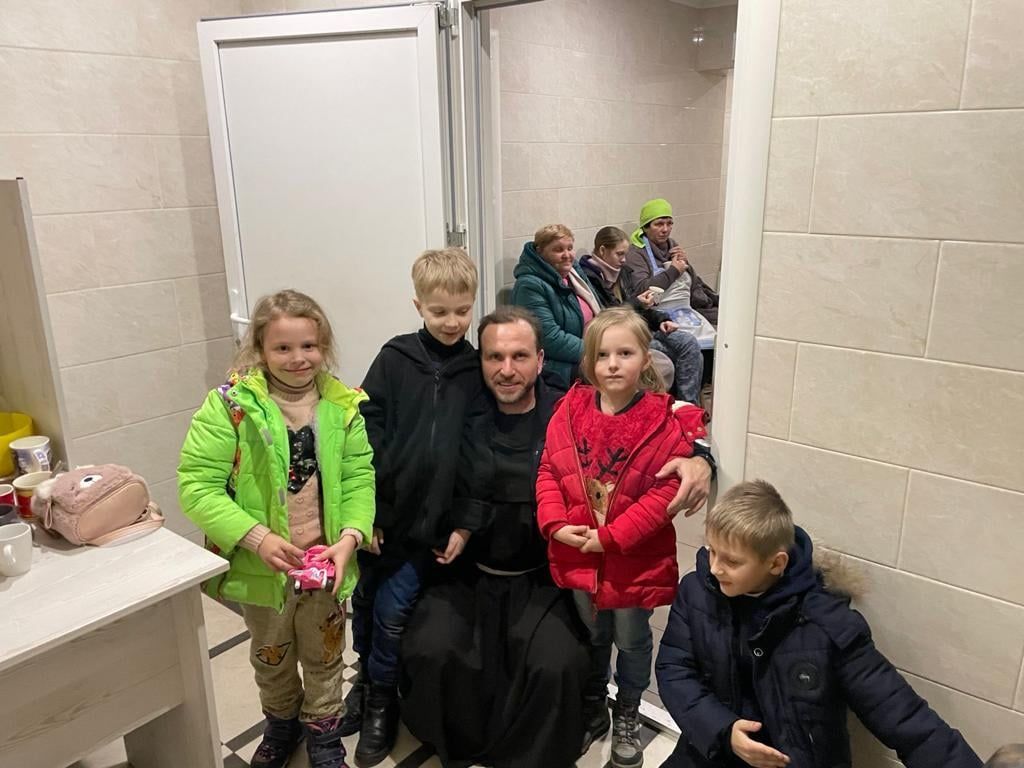 Now more than ever, our Franciscan charism of bringing peace and goodness is revealed where there is unrest, darkness, war.

Children who come to our shelters play, watch cartoons and even forget that there is a war around, and some adults maybe for the first time in their lives take the rosary, pray on their knees, learn to sing religious songs and experience true peace that cannot be achieved through tanks or other weapons, because we have and believe in exactly the peace that Jesus Christ left, Jn 14:27, ‘I leave you peace, I give you my peace. Not as the world gives it, I give it to you. Let not your heart be troubled or afraid.’

The OFM General Curia, through the OFM Fraternitas Foundation, has taken immediate action to provide all possible support to the friars who are personally facing the drama of war.

Their presence is the comfort of a candle burning in the darkness, opposed to those feelings of hatred and despair that cannot take over.

I ask you to donate to support our brothers and sisters who are suffering in Ukraine. In the letter of the Minister Provincial of Ukraine, Br Daniel Botvina, you can find a further witness of the urgency with which we launch this appeal. Thank you.