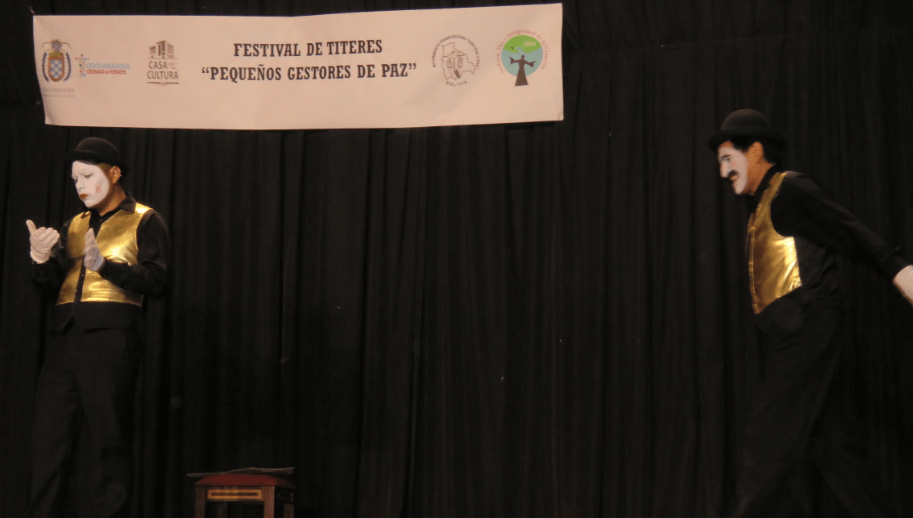 The project “Evangelizing for Peace” was carried out with the support of the JPIC office of the Franciscan General Curia to promote JPIC values ​​in educational institutions with the Franciscan charism of the city of Cochabamba. Eight hundred children between the ages of 9 and 13 participated. They are from the Nueva Luz Foundation, the Hilando Sueños Foundation, the Niño de Belén Educational Unit, the CESFA Educational Unit and the Santa Clara Educational Unit. The purpose was to train little peacemakers who, inspired by the evangelical principles of justice, peace, and the integrity of creation, will reflect and apply them to daily situations and practices.

The educational strategy for approaching children was the creation, writing, staging and presentation of a puppet play in which each group of students represented a problematic situation of their concrete reality and proposed solutions based on the culture of peace and peaceful resolution of conflicts. The productions that were created participated in a puppet festival that was held at the “Adela Zamudio” theater and attended by around 900 people.

The development of the project went through three phases 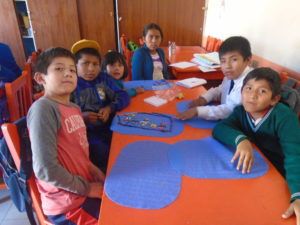 The first was the explanation and promotion of the proposal in the participating educational entities; the drawing up of a calendar of activities and the production of materials: a mobile theater, five puppets, the writing of the puppet play “Antonio the fox”; the selection of dynamics that introduced the theme and the selection of three children’s videos in which the culture of peace and the peaceful resolution of conflicts were disseminated.

In the second phase, two workshops were given to students in grades 4, 5 and 6 in each educational entity. In the beginning, the keys to the culture of peace and the peaceful resolution of conflicts were explained. The structure of the workshop was the screening of a children’s video where a situation of conflict was presented and then resolved in a peaceful way. Then, the theme was presented as part of a dialogue, and then concluded with group work where the students imagined a situation of conflict and proposed a peaceful solution. The creative process began with using plasticine to model the characters and situations imagined by the students and concluded with the writing of the story.

In the second workshop, the play “Antonio the Fox” was staged. The fox thought he was very clever and tried to scam others for his own benefit but had such bad luck that he was always hurt. In the end, the series of failures taught him that the best way to reverse the situation would be to treat others with sensitivity and find a way for everyone to benefit from the situation. Finally, the stories written by the different groups in the previous workshop were presented in the plenary, and they began producing their stories with the help of an expert in puppetry. 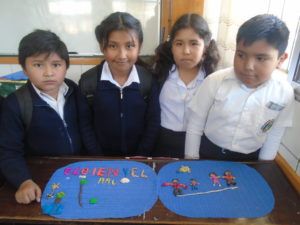 Support in stage editing continued until the students were satisfied with their work. The works developed by all the students were presented in each institution and a discussion followed where they reflected on the problems raised and the ways to solve them. The themes most highlighted were: empathy, respect, humility, companionship, dialogue, and solidarity.

The works chosen by each institution to represent them in the festival were perfected with the help of the puppetry expert and presented in the theater before audiences of all ages who appreciated the effort of the children and the message transmitted.

The secretary of culture of the city, Lic. Roxana Neri said “Thanks to the Franciscan JPIC Movement for promoting this opportunity for reflection through the performing arts. These works are a good complement to the work done by you last year at secondary school level, when the citizens of Cochabamba were encouraged to think about femicide and violence against women during the theater festival. The works presented today by elementary school children showed the importance of tolerance, love, and dialogue to resolve our differences as a society.”

Sr. Antonia Barrillero, director of the Nueva Luz Foundation, said “This kind of activity serves to promote more social integration. Children from peripheral areas participated in the festival, feeling very affirmed by being able to come to the most important theater in the city to perform. That is already a culture of peace, of integration. And the messages of these beautiful works were respect, dialogue…patience. All of this serves to improve coexistence.”

The festival was a joyful and educational meeting space for all. The attendees laughed and reflected with the work of mimes (presented by a professional group) and with the works staged by the children. They were simple, short, and wonderful stories (as Hemingway would say) that, with their brevity and forcefulness, stirred the spectators at gut level and raised questions about how everyday difficulties are solved.

The seed is sown; now it is necessary for all the participants in the project to cultivate it to offer abundant fruit: gathering the message, constantly updating and putting into practice the values ​​that the children offered us to live in peace: love, dialogue, empathy, humility…