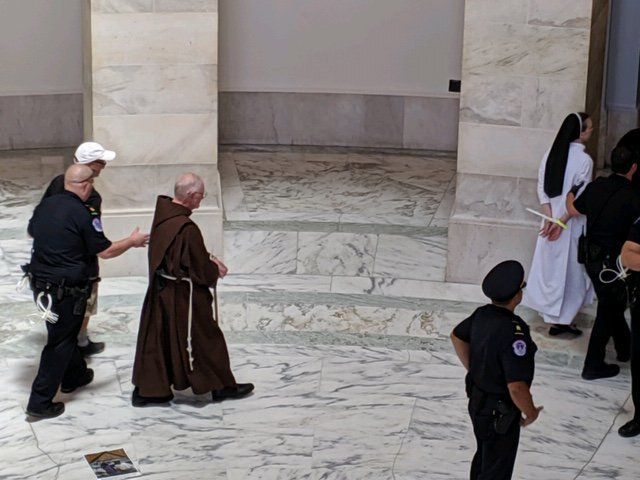 Br. Joseph Nangle belongs to the Order of Friars Minor (OFM) and has served as a missionary in Bolivia for over 15 years, was another 12 years  the co-director of Franciscan Mission Service and last Thursday he was arrested, along with 70 other Catholics, for protesting against the immigration policy of the government of Donald Trump.

Brother Joseph was kind enough to answer some questions for pazybien.es and highlights the serioussituation in which migrants live due to current measures in place by the US administration.

From the Franciscan charism, what motivates you to carry out this type of action, even puttingyour own security at risk?

Thank you for this opportunity to explain a little more certain Franciscan efforts againstmany crimes carried out by the Trump Administration and in particular what we were trying to do with a largegroup of Catholics on Thursday, the 18th of July.  The charism of St. Francis lends itself to ourcurrent times, especially in the US, to carry out a prophetic action against such crimes againsthumanity perpetuated by our government at this time in our history.  St. Francis set the tone in this regardwith his dangerous trip to Egypt at the time of the crusades. We can’t do less now.

How are Franciscans and Franciscans in the United States promoting a cultureof encounter and social integration of migrants?

Everywhere in our country, especially in pastoral work, our habit is a light andhope for the brothers and sisters of Latin America. I think every Franciscan brother and sisterrealizes the crucial role we play with those who are trying to just live in peacein our country.

How can Franciscans join and collaborate in other countries to your action against the death policies the Trump administration?

That is a key question.  From the friars from other countries, we American friars need words of encouragement, challenge and even words that insist that we more and more clearly put into practice our prophetic vocation within the American “empire” of today.

What would you say to Catholics in the US and the rest of the world who support Donald Trump’s policies?

The collaboration and support of the Trump horror by our Christian and or Catholic brothers and sisters is a tragedy, a scandal and something incredible. This is why a direct Franciscan voice is essential. It is a matter, I think, of Jesus’ words and actions: “Alas for you, Pharisees.”

Can we have hope that the current situation can be reversed?

There’s always hope. Politically we long for a radical change with the 2020 elections. In terms of our faith, we console ourselves with the words of God from the Prophet Isaiah: “Console my people, console them…their period of service is ended. I have heard the cry of my people.”

Do you plan to repeat actions like those you took at the Capitol? What legal consequences could they have for you?

I believe that what we have done on July 18th may well be, well, must be repeated constantly by US Catholics. I would call my dear friars, together with the Franciscan sisters to be part of what can be a great movement in favor of justice for “the lesser ones.” It seems to me that this movement could boost a necessary renewal and revitalization of the Franciscan community in this country.

Brother Joseph also highlighted, during the press conference last Thursday, what is defined as “original national sin:” Despite the great rhetoric about freedom and independence, the founding statement of our Country was plagued with racism and misogyny from the get-go.  Written by several slave owners and excluding women from the right to comment on the public life of the country, the document contained a great insult to the original Americans.

In the Declaration of Independence of 1776, the only reference to native Americans was to keep far away from “our borders, the ruthless and poor wild Indians, who everyone knows their main precept is destruction regardless of age, sex or condition.”

Now, more than two hundred years later, one would have thought that those sins, at least, would have started to be overcome. Slavery was officially abolished; women received the right to vote at the beginning of the 20th century; and the civil rights movement of the 1960s addressed the persistent injustices towards African Americans.

However, in today’s climate, Donald Trump is dragging us back to those dark times with a combination of irrational fear and hate toward people who are not like him with an atmosphere of pure cruelty. What is almost worse, are the so-called Christians who support, applaud and allow this descent to a new dark era in the United States.

Today, we make our own the words of the Catholic Bishop of El Paso, Mark Seitz, when he sees the daily horrors that take place between his city and Ciudad Juárez: “This government and this society are not well. We suffer a hardening of the heart that threatens life.”