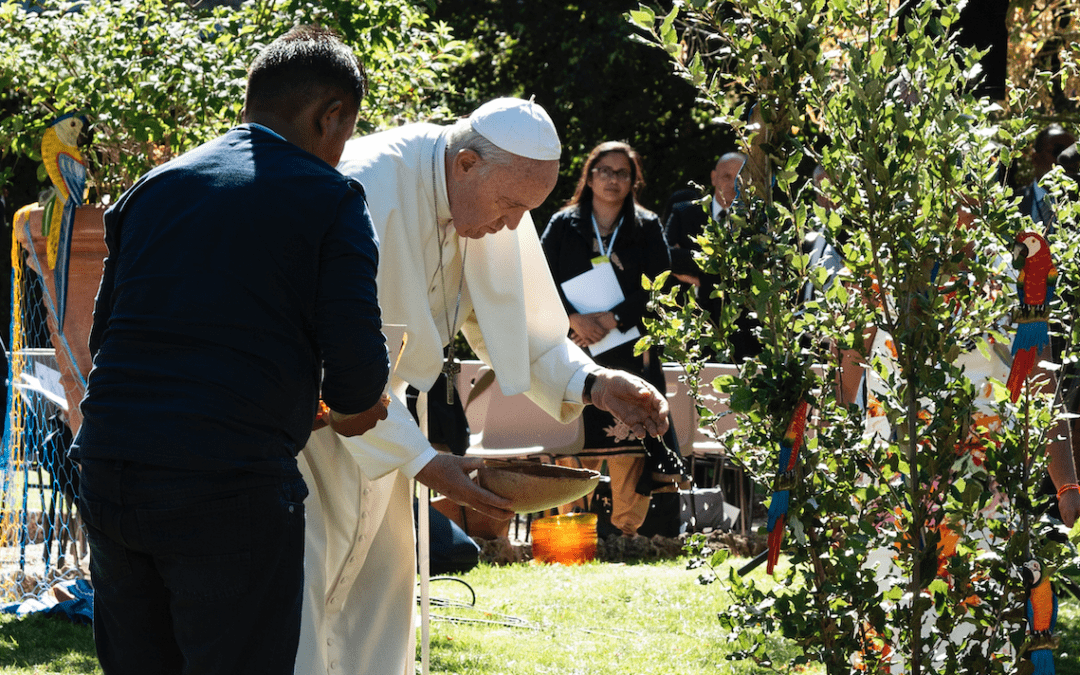 Today, at a powerfully symbolic event held in the Vatican Gardens, Pope Francis planted a tree alongside Amazonian leaders from Brazil and dedicated the upcoming Synod on the Amazon to St. Francis of Assisi.

The Amazon Synod, which begins Sunday, is a gathering of bishops from around the world who will meet in Rome for three weeks of discussions on how to better care for the Amazon and accompany its people. Long-held concerns about the Amazon’s deep social and environmental challenges were recently made evident in the catastrophic wildfires that destroyed forests and indigenous communities.

The tree-planting is Pope Francis’ first gesture to mark the Season of Creation, building on a message he issued last month that invited the world’s 1.2 billion Catholics to celebrate the season. The Season of Creation is an annual celebration of prayer and action for the environment that is observed by many Christian churches. It begins on September 1, the World Day of Prayer for Creation, and concludes today, the Feast of St. Francis.

Consecrating the synod to St. Francis is a powerful symbolic gesture with strong resonance in Amazonian countries, where Catholics constitute a majority of the population. In the words of Pope Francis, “St. Francis is the example par excellence of care for the vulnerable and of an integral ecology lived out joyfully and authentically.” Dedicating the synod to St. Francis signifies the Church’s strong commitment to protecting indigenous peoples and the Amazon rainforest.

Ednamar de Oliveira Viana, the indigenous leader from the Maués region, Brazil, who planted the tree alongside the Pope,said, “To plant is to have hope. Planting in the Vatican Garden is a symbol that invites the Church to be even more committed to the forest peoples and all of humanity.  But also, it is the denunciation of those who destroy our common home by greed in search of their own profit.”

The vulnerability and knowledge of indigenous peoples will be a special focus of the Synod. In the words of the Synod working document, officially called the Instrumentum Laboris, the goal is “to listen to the voice of the Amazon and to respond as a prophetic and Samaritan Church.” The indigenous Amazonian concept of “good living,” which includes living in harmony with nature, is a guiding principle of the synod’s working document. The also contains first-hand accounts and quotations taken from the hundreds of Amazonian community workshops that served as preparation for the synod.

The tree that was planted is a Holm Oak, the tree reputed to have been at the center of one of St. Francis’ famous conversations with nature. Its inclusion in the event further emphasizes the Church’s commitment to protecting the Amazon rainforest, where deforestation has been accelerating. In the last year, deforestation has increased by as much as 60%, according to Brazil’s monitoring agency.

The synod begins October 6 and runs through October 27. Its official website is here. Although the synod is open only to bishops and special auditors, a public event series around Rome will bring its themes to the wider public. More information about the event series, “Amazon: Common Home,” including an event calendar, is here.

This event was organized by the Global Catholic Climate Movement (GCCM), the Pan-Amazonian Ecclesial Network (REPAM), and the Franciscan Order (Order of Friars Minors, OFM).