During this pandemic, advocacy work was challenging. Franciscan International has the difficulty of bringing partners from outside Europe. On that note, they maximized the opportunity that Br. Angel Cortez, OFM was there with them.

As a Filipino Franciscan, he worked with them for almost four years before his mission in the office in Rome. He is part of the Philippine Human Rights Delegation that does lobby work every UN Human Rights Council. This time he was asked by FI to meet some diplomats for some lobby work and read a statement during agenda item number ten of the council. 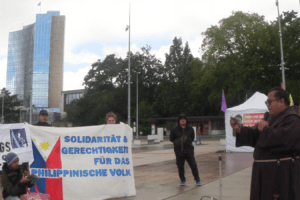 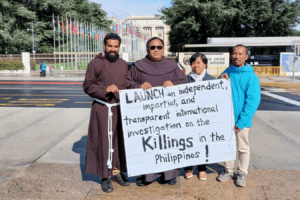 The statement calls that despite the attention paid by the Human Rights Council to the situation in the Philippines, there has been no substantial positive change on the ground. FI and partners denounced the widespread and daily State violence against the Filipino people. Noting that domestic mechanisms have failed to show meaningful progress toward achieving justice for the many victims of the so-called ‘war on drugs,’ the statement reiterated the call on the council to establish a Commission of Inquiry to start a long-overdue investigation.

On the same day, a solidarity protest for the Philippines was held in the infamous Broken Chair landmark in front of the UN flag of Nations. It was attended by different Human Rights Church and Civil Society NGOs in Europe led by Geneva Forum for Philippine Concerns 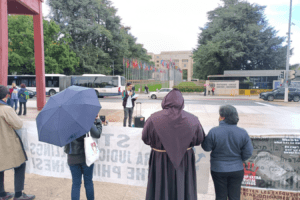 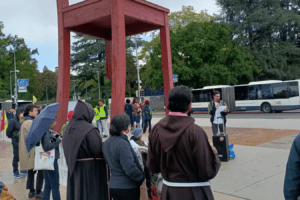