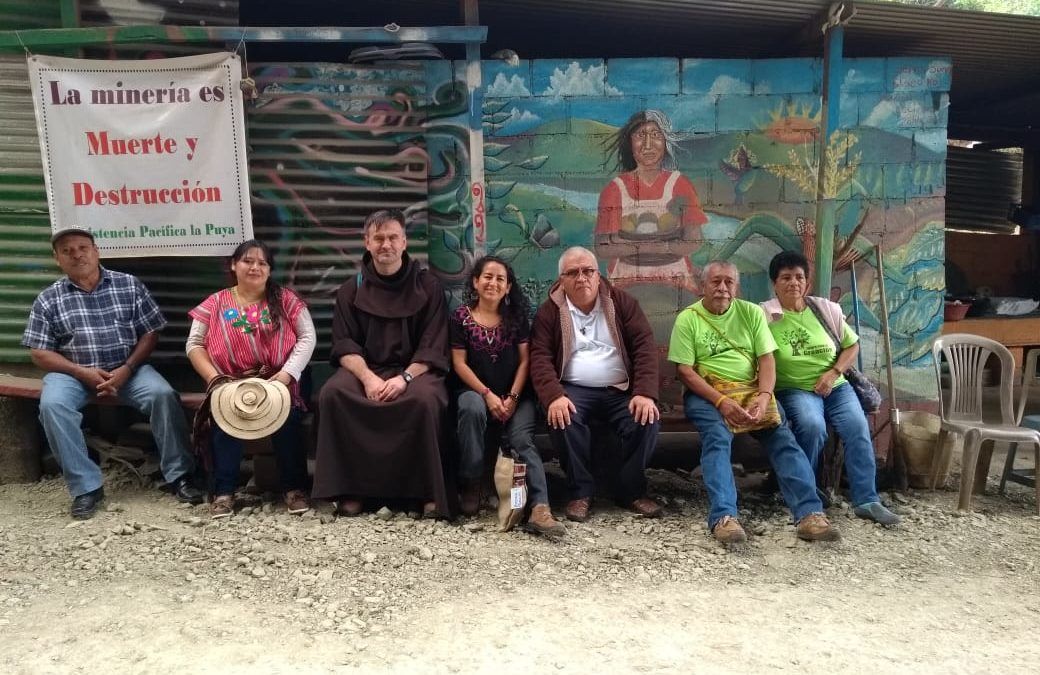 The municipality of San José del Golfo is about 25 km from the capital of Guatemala, and the place known as La Puya is approximately 1 km from San José. The residents of communities affected by mining have set up an ongoing protest against the mine, “El Tambor” Progreso VII Derivada, owned by the Kappes Kassiday & Assocciates (KCA) company headquartered in the USA, and represented in the country by EXMINGUA.

For several years, the local people have been engaged in a process of training, information, and awareness about the effects of mining, and so on March 4th, 2012, they began a blockade of the entrance gate to the mine. They settled in 24 hour shifts in groups to guard, block the entrance, and not allow the mine to be operated, which to them is illegal and lethal.

They have suffered two eviction attempts, the most violent taking place on May 23rd, 2014. The corrupt links between government authorities and the mining corporations led to the deployment of a contingent of about 300 policemen, resulting in 26 local people (mostly the elderly and women) being injured. During the years of resistance, in a situation where some are in favor of the mine and some against, there have been multimillion-dollar investments to discredit communities, threats, assassination attempts on community leaders, violent evictions, division of families, and also material damage.

Women’s participation, visibility and resistance in the protest have been essential. In one incident a lady blocked the gate of the mine with her vehicle and suffered an attack that almost killed her. The women were to the fore when employees of the mine arrived to create confrontation and a counter demonstration during the eviction attempts. They welcome people and cook after the monthly First Sunday Mass.

It is the women who also suffer the effects of the migration of their husbands, children, and other relatives. The population of the municipality of San José del Golfo migrates mainly to the US, leaving women in the care of property, children, and in some cases the migrants’ other family members. It is difficult for people to live and produce good harvests due to the effects of climate change, water shortage, and the effects that mining brings to the area. Emigration, even with the risks that it implies, is the only hope.

In 2017, the Constitutional Court of Guatemala ordered the suspension of works at the mine and a community consultation, but what had been hoped for was the definitive cancellation of the company’s exploration and exploitation license. For this reason, despite the suspension, the mining company has not moved away.

As the JPIC commission of the Franciscan Family, we have known these people, accompanied them at various moments and shared their joys and sorrows. They are simple and inspiring people, but they have had to learn technical language to counteract the mining company’s rhetoric. They are also people of faith who know that God accompanies their struggle and is present in their midst. One can learn so much from them, taking turns with them in the human barricade, cooking on their wood stove, listening to their conversations and their music.

During the 3rd Franciscan Mission Congress, we made a visit to La Puya accompanied by some JPIC friars from the Provinces of Mexico and the United States. We celebrated the achievements of the peaceful resistance at La Puya and made common cause, because they are a great example of a victory of the people in defense of their area, and in their search to vindicate the rights to life, water, defense of Mother Earth, and care for Creation.