From the friary of St. Francis to a Covid 19 Hospital in Tortona 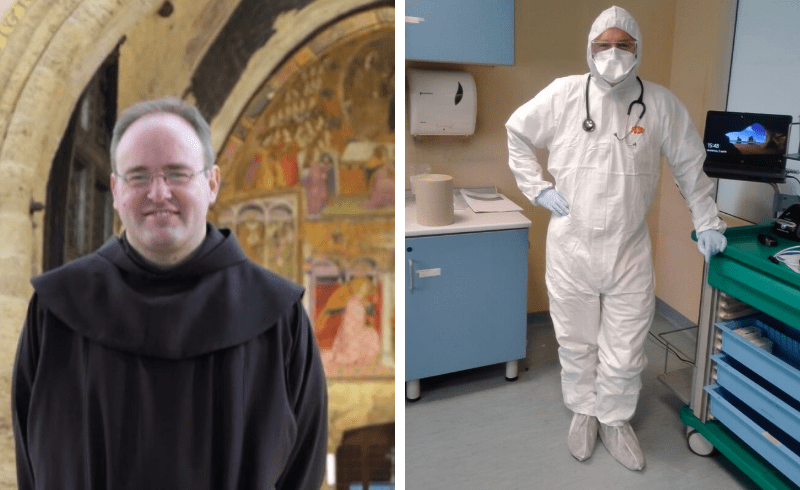 Friar Andrea Dovio, a 44 year old priest, serving as Secretary to the Provincial Minister at the Portiuncola in Assisi one day made an extraordinary request to his superior. He asked to go and serve in the fight against the novel Coronavirus in the hotbed of the epidemic in the very north of Italy. He had entered the Friars Minor in Umbria at the age of 32 but before that he had worked as a doctor the San Luigi hospital in Orbassano and he was a specialist in internal medicine. His Provincial, Fr. Claudio Durighetto, reflected deeply in regard to the same.  He concluded that whilst as religious our primary role in this emergency was a response by way of prayer and the offer of our life consecrated to the Lord, this also included the duty of charity and with Friar Andrea’s competences he could render an important and significant help in the circumstances. Friar Andrea wasted no time. Thanks to the intercession of the bishop of Tortona, Msgnr. Vittoria Viola (a friar originally belonging to the Umbrian Province) he was accepted by Giuseppe Guerra, Commissioner of the hospital there on 3rd April 2020. After a quick course on the use of protective equipment he commenced his work on the 2nd floor department helping to look after 20 patients who

were in the recovery phase, having passed from being critical to being no longer in need of oxygen. He worked each day with another volunteer doctor for a 38 hour week which in case of necessity was prolonged. He lived in a small, self-contained apartment in the local seminary, made available to him by the bishop where he could live alone and avoid possibly dangerous interaction with others.

Friar Andrea was interviewed about his reason for being in Tortona by a local magazine, Il Popolo Tortona. He replied:

“I am here for the love of Jesus Christ, it is from his words and actions that the impulse to serve flows. In this time of a pandemic, like all my brothers I felt the need to rethink my activities in order to help those in need……the call to place my medical expertise to aid those who were sick was very strong”.

He did express his fear about getting the disease, the doubts about going into an area of expertise, infections, which was not his own, and also the worry of going into a situation and environment which was unknown to him, but he is content about having answered the call. He is clear that he is there as a doctor, and does not step into the area of assistance provided by the hospital chaplain. He follows the rule of St Francis, is subject to all creatures for the love of God and confesses himself to be Christian. The patients know he is a friar and he talks with joy about the fact, but that is enough.

He is thankful for the Provincial Minister’s decision to allow him to serve in this way and expresses his gratitude to his professional colleagues in the hospital who welcomed him so generously and cordially and who show daily an example of their professionalism and dedication.