Fr. Massimo Fusarelli, OFM participates in the announcement of the new name of the Global Catholic Climate Movement 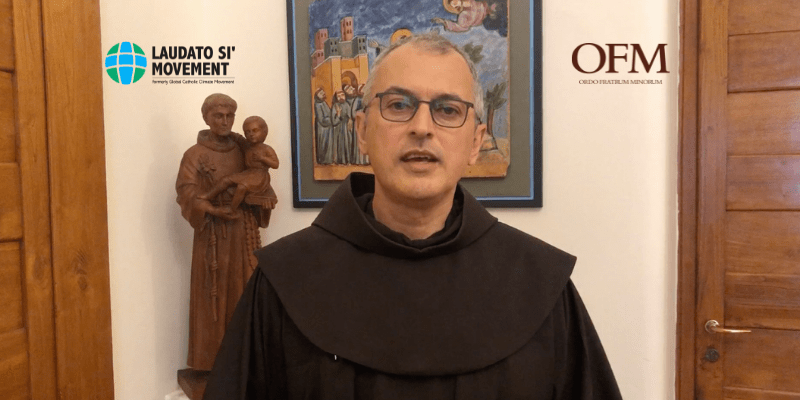 The Global Catholic Climate Movement, born in 2015 and inspired by the publication of the encyclical Laudato Si’, is a Catholic movement made up of more than 800 organizations and thousands of Laudato Si’ Animators around the world.

In 2020, on the occasion of the fifth anniversary of its founding, the movement initiated a major discernment process about its identity, mission, name, and structures. This process was developed in a synodal spirit, involving its members through several rounds of consultations.

One of the most important changes of this process has been the organization’s new mission statement: “To inspire and mobilize the Catholic community to care for our common home and to achieve climate and ecological justice.”

In the words of Dr. Lorna Gold from Ireland, Chair of the Board of Directors: “It is important to note that the mission is being broadened to include the concept of ecological justice, based on the spirit of Laudato Si’, where ‘everything is interconnected.’ This new mission reflects a broader and more coherent vision with Laudato Si’, which was the spark that motivated the founding of the movement in the beginning.”

Together with the new mission, a new formulation of values, structures, and identity has been announced.

Regarding identity, the big news is the movement’s new name: Laudato Si’ Movement.

Tomás Insua, Executive Director and one of the co-founders of the movement in 2015, said: “We started working on the name change in 2019. The main reason, beyond the difficulties of the previous name which was too long, was that we felt that Global Catholic Climate Movement no longer represented what we were really doing. From practically it is beginning, the movement has developed its activities from the integral vision of Laudato Si’, much broader than the climate crisis.”

Choosing the name was no easy task: a list of 25 possible names was submitted for consultation and voted on by hundreds of movement members, cardinals, and other Church leaders.

After two years of discernment, confirmation of the new name came from Pope Francis: “We sent the Pope a letter explaining the synodal process we had followed and asking for his blessing to change the name. The Pope’s response, in the form of a written message, came providentially on the eve of Pentecost, during this year’s Laudato Si’ Week,” said Yeb Saño, Vice Chair of the Board of Directors for the Philippines-based movement.

The handwritten note from Pope Francis reads: “To the Laudato Si’ Movement: Thank you for the mission of promoting integral ecology and for the help you offer to the Church throughout the world. Happy Laudato Si’ Week. Fraternally, Francis”.

The Laudato Si’ Movement thus reconfirms its identity as a global movement that brings together more than 800 Member Organizations and thousands of Laudato Si’ Animators at the local level.

For more information about the movement and its activities, go to laudatosimovement.org.