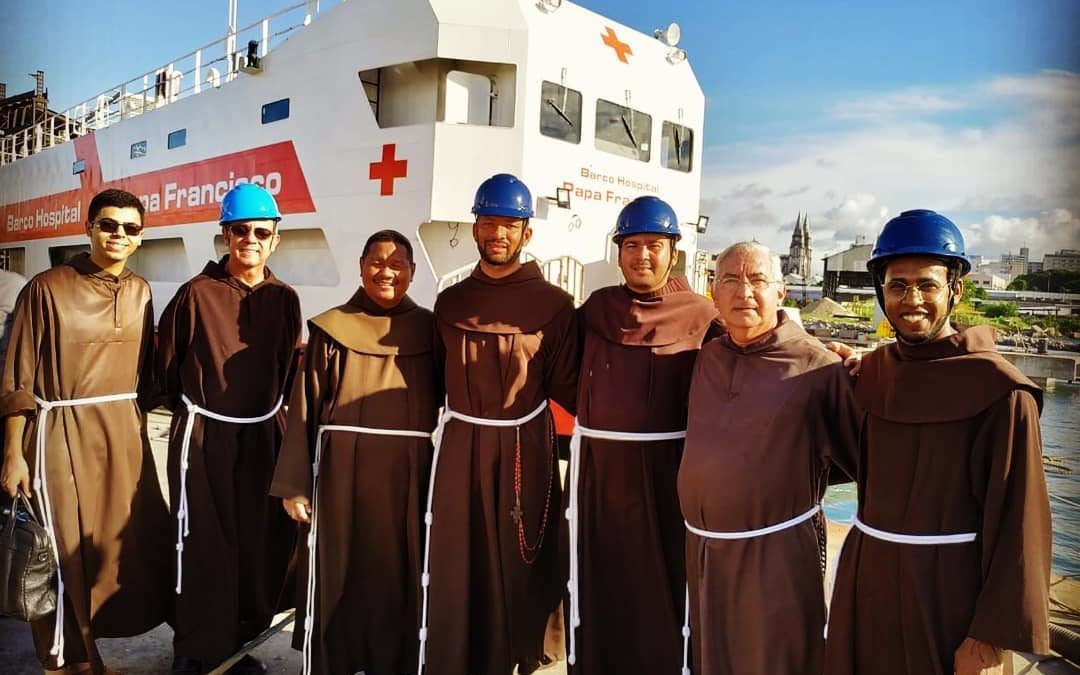 During the World Youth Day in Brazil, 2013, Pope Francis visited a hospital that is under the care of the Fraternity Saint Francis of Assisi in the Providence of God. During this visit, Pope Francis, in a conversation with Fr. Francisco Belotti (Superior General), asked him if the Fraternity had a presence in the Amazon, and encouraged them to carry out some project in the region. After that, the friars were motivated to attend to this request and presented the model of what would be a “hospital ship” to the Holy Father in the Vatican on November 5, 2018.

This project is a joint initiative between the Diocese of Óbidos, the Fraternity mentioned above and the Ministry of Labor. The purpose of this project is to bring health service to the riparian communities in the Amazon region and act in cancer prevention through examinations, classification and diagnosis. For this purpose, the hospital ship has a structure of outpatient clinics, laboratories, surgical room, accommodation for professionals in the medical service who are mostly volunteers from clinical hospitals, administered by the Fraternity of St. Francis of Assisi in the Providence of God, as well as the Franciscan sisters’ Congregations. For example, there is a nun-doctor in the team.

We give thanks to God because of the blessing of the ship on March 20, 2019, in the presence of friars of OFM, OFM Cap., engineers and government members. In the Naval Industry of Ceará (INACE), the Pope Francis Hospital Ship received the blessing of God through the hands of Fr. Francisco Belotti who underlined his joy at his dream-come-true and the presence of various Franciscan friars. What was previously only a project on sheets of paper, now became a reality. A new phase has begun with the ship that will undergo tests and final check-ups for a while. After that, the boat will go to Bethlehem, where it will receive an image of the Virgin of Nazareth and will continue its journey towards Óbidos – PA, where it will depart for its first mission after a celebration. We pray that this “daring” project may serve those who are in great need of medical attention in such challenging realities. As Fr. Francisco reminded us during the benediction, “The people of Amazon have difficulties to see doctors and priests, and now they can see them in this hospital ship.”