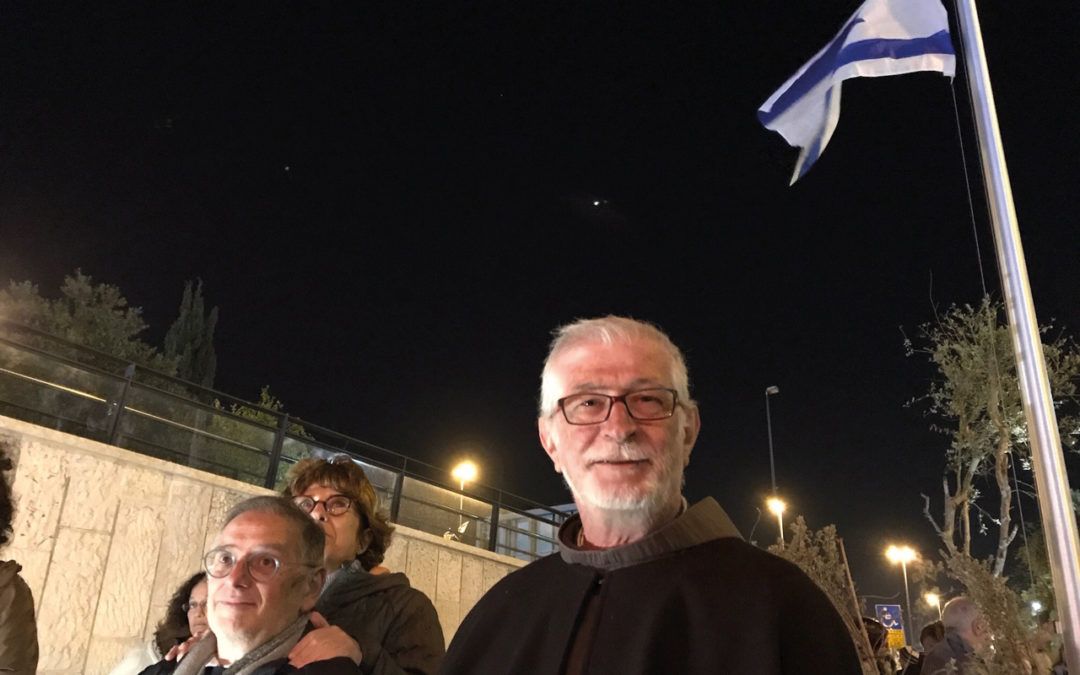 In a moving public ceremony held in Jerusalem on May 8, the Forum of Organizations for Human Rights in Israel paid tribute to Br. Giorgio Vigna, Coordinator of the Commission for Human Rights of the Custody of the Holy Land in Jerusalem, with honor to light one of the 12 torches for peace and justice.

The ceremony brings together Israeli and Palestinian organizations working for peace and social justice, and every year the honor of lighting up torches to 12 leading activists of different Organizations is given, hoping that the light of these torches will illuminate the path towards a better world.

Br. Giorgio Vigna was the first Christian religious honored in these ceremonies and received this tribute in his name but also, as declared by the organizer of the event Yshai Menuhim, in recognition of the constant commitment of the Franciscan Custody for human dignity.

In his speech, Br. Giorgio Vigna emphasized the Encyclical Laudato si’ and the call of Pope Francis to strengthen the human relationship with God, with our neighbor and with the Earth. Receiving this torch, he said, is not just an honor but a responsibility that calls us to continue working for a more humane society. Br. Giorgio added that he dedicated this torch to all his Franciscan brothers who live in Israel, Palestine and the Near East, and expressed the hope that their work and courage will open the way for a world of peace.

I am very happy to be with you this evening, because it is an honour for the Custody of the Holy Land and for me personally to receive this sign that recognizes the Franciscans’ commitment to Justice and Peace.
This simple object, this torch, is the bearer of light and somehow a sign of God’s presence. I cannot forget that  light is the clothing of God (עֹטֶה-אוֹר כַּשַּׂלְמָה, Tehillim 104:2). Where God is present, there is the light of life that enlightens and illuminates the arduous journey of fallen man clothed in a “tunic of skin” (וַיַּעַשׂ יְהוָה אֱלֹהִים לְאָדָם וּלְאִשְׁתּוֹ כָּתְנוֹת עוֹר וַיַּלְבִּשֵׁם, Bereshit 3:21) but initially “clothing of honour” or “of light”, אוֹר(cf. Targum Onkelos; HaKtav VeHaKabalah).

Some rabbis also point out that the face of man has seven openings, as the Menorah has seven flames of light. The analogy between the Menorah and the face of man suggests that man is called to be a Menorah in the world and for the world: to be the sign and bearer of the presence of the Name. His life therefore is a call to “repair the world” (תיקון עולם). The same Jesus of Nazareth says that His disciples are “the light of the world” (Gospel of Matthew 5:14), and they are called to be a sign of Presence and to repair the world: “Be compassionate just as your Father is compassionate” (Gospel of Luke 6:36).

Receiving this torch is not only an honour, but also a call to responsibility to dedicate one’s life to repairing the world, a prisoner of the profound, widespread and growing injustice, a prisoner of violence and poverty that affects millions of men, women and children from every continent. With the progressive fading of humanism we are walking on a road of self-destruction. This self-destruction also deeply touches creation itself, a beautiful exit, indeed “a very beautiful one” (וַיַּרְא אֱלֹהִים אֶת-כָּל-אֲשֶׁר עָשָׂה וְהִנֵּה-טוֹב מְאֹד, Bereshit 1:31) from the free word of God, but now ugly due to  human selfishness.

Dedicating one’s life to Justice and Peace means working to repair the world, the human world and the world of nature. The human and natural world cannot be repaired without its dignity and rights being recognized and restored: the dignity and rights of every human being “created in the image of God” (בְּצֶלֶם אֱלֹהִים בָּרָא אֹתוֹ, Bereshit 1:27), the dignity and rights of the whole creation, which was viewed as very beautiful by the Creator, and I would also say the dignity and the rights of God who has always been looking after for mankind (וַיִּקְרָא יְהוָה אֱלֹהִים אֶל-הָאָדָם וַיֹּאמֶר לוֹ אַיֶּכָּה, Bereshit 3:9). Allow me here to recall what Pope Francis says in his letter Laudato si ’: “The creation accounts in the book of Genesis contain, in their own symbolic and narrative language, profound teachings about human existence and its historical reality. They suggest that human life is grounded in three fundamental and closely intertwined relationships: with God, with our neighbour and with the earth itself. According to the Bible, these three vital relationships have been broken, both outwardly and within us” (n. 66).

In this context of celebration of creation and of God, and renewed commitment on behalf of every human being, I wish to dedicate this torch above all to my Franciscan brothers who live here in Israel-Palestine and throughout the Middle East. May their faithfulness to the mission and their firm constancy in service to their people be blessed and encouraged by each one of us. I dedicate it to them without forgetting all those men and women who hope and work for a more just and therefore more peaceful world.

We are very grateful for your friendship and support. We also need it!